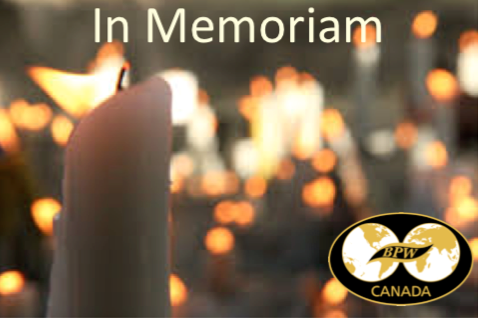 BPW Clubs are invited to recognize and honour club members who have passed. BPW member contributions are recognized at the biennial memorial service conducted at the National Convention.

Women's W.O.R.K. (Women Offering Resources and Knowledge) is a Memorial Fund affiliated with BPW Canada and helps clubs host educational events for members and community through its funding. Women's W.O.R.K. is a Charitable Organization registered with the Canada Revenue Agency.

Donations can be made in memory of loved ones through Women's W.O.R.K. and charitable donation receipts will be issued. Donation cheques can be mailed to the Women's W.O.R.K. Treasurer, #109 16080 82 Ave. Surrey, B.C. V4N 0N6, or to pay via credit card or PayPal, submitted through www.canadahelps.org resulting in an immediate tax receipt and also the option of sending a virtual card. BPW Canada members, please login to the Members' area of this site to download the Women's W.O.R.K. application.

Welland, ON: Linda Armburst, member of BPW Welland and former provincial president of Ontario (1991-1992), was very passionate about resolutions at BPW.

Belleville, ON: Dorothy Brown was the charter member in 1950 of the Belleville club and served for a term as provincial president of Ontario.

Cambridge, ON - Elizabeth Roos Clare was a long time member of 46 years and served as president of the Cambridge club (1983-1985). Libby was a Life member of BPW

Brampton, ON -Olga Gill passed away while serving as National Secretary.  Her previous involvement at BPW included being President of BPW Toronto, historian and secretary for BPW Ontario & Canada, as well as Chairperson for Resolutions.

Toronto, ON -Henrietta Green was a long-time member of BPW (since 1972).  She served as treasurer of BPW Toronto and as President for two consecutive terms (1999-2003).

Regina, SK - Eleanore King, long time member of BPW, passed away January 29, 2014. Eleanore was the moving force behind the first Careers Unlimited event over 30 years ago. She was the president of BPW Regina at one time, and attended many national and international BPW meetings on behalf of the club. She was a delight to know and work with and will be greatly missed.

BPW Clubs are invited to recognize and honour club members who have passed, by having the member's contributions recognized at the bi-annual memorial service conducted at the National Convention.

Donations to a memorial fund in honour of a member's passion and commitment to BPW are welcome. 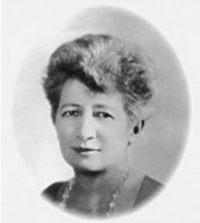 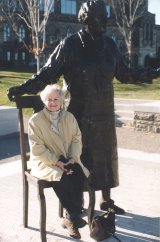