Another year has come and gone!  I hope that 2010 was a good year for all and I wish everyone success and prosperity in 2011.  I look forward to a great year working with you in BPW.  There are many events to look forward to, the Committee Meetings on the Status of Women (CSW) at the United Nations in New York in February, provincial conferences/AGMs in the spring across the country, International Congress in Helsinki, Finland in June, and our National AGM in Ottawa in July.  I hope to see many of you at these events.

Mark you calendars to visit Ottawa, Canada’s capital city on July 22 and 23 to attend our National AGM and share in the decision making of BPW Canada and connecting with your BPW friends.  We have booked The Westin Hotel for the event which is near the market, parliament buildings, shopping and the entertainment district.  We will strive to accomplish the business in good time and allow an opportunity for you to enjoy the city.

Click here to book your room at The Westin Hotel.

You can now register for Congress and your hotel accommodations on-line, click here.   Please send This email address is being protected from spambots. You need JavaScript enabled to view it.details of your itinerary if you are attending so that all can connect in Helsinki.  This is an opportunity to participate in a worldwide event where BPW Canada will be represented by delegates and present three resolutions from the last two conventions.

The seminar leader was Léa Benegbi, Executive Director of La Passerelle, a Career Transition Center, that offers individual coaching and group workshops for people over 40 and over 55 who are seeking to change careers.

Several good interview strategies were elaborated.  Following are a few:

In a private room in Le Sanctuaire provided by member Barbara Burman, Members and guests were brought gifts for the auction.  Eight hundred dollars was raised and sent to the Women’s Centre of Montreal for their annual holiday basket food drive.

As well as having fun bidding on the auction items and enjoying each others company, we also initiated five new members of which three are Young BPW. 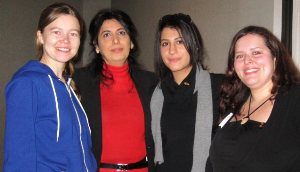 Congratulations to the newly elected Board of Directors for BPW New Brunswick.

BPW Canada has launched their 2011 Equal Pay Day Campaign encouraging Canadian women to become informed about how they can prepare themselves to deal with and potentially put an end to gender-based discriminatory pay practices.  Practices that limit their advancement to higher paying jobs and undervalue their contribution.

Today women in Canada on average are required to work an additional 2 ½ months into the next year to earn the same income that men earn doing the same job working the regular  12 months of the preceding year.

To join BPWC in creating a buzz and to learn how social media can help us send a clear and strong message that when it comes to Economic Equality BPW Means Business click here to link to the BPW Canada Income Equality page.

One Woman's Experience of Bullying in the Workplace - Jos Herman, President, BPW Saskatoon

Excerpt from Submission by Jos Herman, President, BPW Saskatoon – One Woman’s experience of Bullying in the Workplace Pam Bowman was always the problem at work.  They said she was stupid, unreliable, and unprofessional, and was disliked.  She couldn’t even boil water properly.

A victim of workplace bullying, Bowman spent about 15 years facing increasingly hostile treatment from co-workers, leading to serious health problems, the collapse of a career in veterinary technology and a seemingly endless fight for her right to a safe and healthy workplace.  “It was just chronic stress. It was like going into a war every day. What was going to happen next?” she said in an interview this week.

Earlier this year Bowman reached a settlement with her former employer, freeing her to move on to a new, entrepreneurial phase in her life. She now plans to start her own business to help people facing workplace bullying and help employers understand the consequences of such an activity. “It’s a serious health and safety issue and it’s not as benign as people would like to imagine,” she said.  “It’s a really horrible situation all around for everybody, it’s not productive and from a business point of view, it’s really bad.”

To view the rest of the article click here.

BPW Canada has been advised by Service Canada that the Government of Canada has launched an initiative of benefits for the self-employed.  The program is voluntary but one has to register for it.  For further information click here.

Quebec to shine a bright light for Canadian women

"Liberal Premier Jean Charest arrived in power determined that women take their rightful place at the cabinet table and in the boardroom. In an interview last fall, Charest said that when he became leader of the Quebec Liberal Party in 1998, he insisted the party offer female candidates for the National Assembly ridings they could win. (Boosting the number of female candidates by offering them losing seats is a favourite trick of political parties not really committed to getting women elected to public office.)

In 2006, Charest legislated gender parity on the boards of Quebec's crown corporations. Before the law was passed, the corporations protested that there were no suitable women. Afterward, there seemed to be no problem finding them.

Legislated efforts to promote gender equality may strike many Canadians as a step too far. Canadians want to believe in -and work in -a system based on merit. But for a meritocracy to be truly legitimate and worthy of support, impediments to equal opportunity need to be brushed aside, as Quebec is doing.”

National Council of Women of Canada

BPW Canada is associated with the National Council of Women and we share information back and forth with them.  The National Council of women was formed in 1893 and “continues to voice concerns, ideas and points of view from a wide range of members across Canada,” says president, Mary Scott.  “These include the gun registry, the long form Census, the shipping of radio active steam generators on Lake Huron, and Bill C23...the truth the Sentencing Act”, to name a few.  It is now 117 years old and going strong.  Click here to visit their website.

The new form of census will take place in May 2011.  An accurate national census is very important for planning of services such as schools, daycare, police services and fire protection. The NHS data is needed for the implementation of community services such as housing, roads, public transportation, skills training for employment and family services.  Please click here to read the notice from Statistics Canada to help you make your decision to participate.