The first three months in the position of President, has provided me with many opportunities for a good start in the role.  With the help of National Secretary, Sheila Crook, we have published the first BPWC club mailing and conducted our first board meeting. Now here is the first President’s newsletter for this biennium.

BPW Edmonton: I had the distinct pleasure of traveling to Alberta on September 14th to attend the Charter Ceremony for the launch of the new Edmonton Club.  What an exciting event!  It was held at a Lexus Dealership in Edmonton with more than 50 guests and 13 new members shown in the photo.  President Sally Arkell-Boles made a real splash in Edmonton and the Charter Ceremony was honoured by the attendance of three women from their City Council.  This club is ready to make a difference in Edmonton as the voice for women.  Also shown in the photo is BPWC Vice President, Connie Friesen who inspired Sally to form a club, and BPW Calgary Club member, Barb Francis, their mentor. 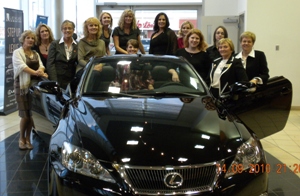 To round out my trip, I also had the pleasure of meeting with members of the BPW Calgary Executive to answer some questions and give them encouragement.  They are very enthusiastic about their Club and eager to grow, not only in Calgary but in the surrounding cities of Red Deer and Lethbridge.  They plan to spread the word of BPW.

Next, off to Las Vegas to the Regional Conference for North America and the Non-Spanish Speaking Caribbean chaired by Regional Coordinator, Jill Worobec from British Columbia. The International Young BPW held their conference concurrently with the attendance of eleven young members from around the world.  It was a great pleasure to have their participation and to hear the enthusiasm from their Chair, Nadia Munawar Siddiqui. Eighteen members of BPW Canada attended from British Columbia and Ontario.  The program was packed with a review of the proposed constitutional changes, presented by International Executive Secretary, Dr. Jean Murray, Women’s Empowerment Principles presented by BPW International President, Liz Benham, a presentation on Peace and Conflict by Elise Campos, a member from Brazil and Emotional Intelligence and Empowerment Tools presented by Past International President, Dr. Antoinette Ruegg.

The workshop on Pay Equity “You are Worth It” was launched at the Regional Conference in Las Vegas by the capable, Sheila Crook, with the support of BPW member from Chicago, Barbara Young, Interim Vice-President, EPW-USA, and the Pay Equity Commissioner for Ontario, Emmanuela Heyninck. It is available to download, click here. 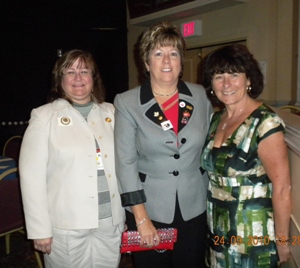 In addition, a workshop that I coordinated with the assistance of Eileen Brennan from New York on Human Trafficking, was presented by Chicago member, Cheryl Jefferson and Lt. Karen Hughes, Head of the Vice Squadron for the Las Vegas Police.  They were both dynamic speakers who covered the topic well and provided lots of information to the audience along with some suggestions for recognizing the problem in their own community and keeping themselves and their families safe.

Members of BPW attended from across Canada and the US, as well as Haiti, Cayman, Mexico, Australia and Switzerland.  The clubs in the US had their Annual General Meeting immediately following the conference in which they finalized the formation of the new US International organization, Enterprising and Professional Women (EPW-USA) to replace the previous BPW-USA.  They are now officially a part of BPW International as a Federation.

BPW Brampton held its 15th Annual Women's Charity Golf Tournament on June 10, 2010 at the Caledon Country Club.  There were 115 golfers who enjoyed a fun filled day with great golf, laughter, dinner, silent and live auctions.  With the assistance of prize donations, hole sponsorship and corporate donors, BPW Brampton raised over $6,000.00.  Recipients this year are the Chinguacousy Wellspring Cancer Support Centre, the Salvation Army Honey Church Women's Shelter, the Sexual Assault/Peel Rape Crisis Centre and the Buddys' N Bows Foundation.  We will be hosting our 16th annual golf tournament on Thursday June 9, 2011.  Stay tuned to our website for more details.  Hope to see you on the greens!

Planning a visit to New Zealand

BPW New Zealand Home Hosting members are keen to make their homes available to fellow BPW members and their partners traveling to New Zealand in 2011 and especially to see the Rugby World Cup games in which Canada is playing.  For more detail, click here to go their website.

This event aims to:

A New Entity has been born at the United Nations

The Gender Equality Architecture Reform (GEAR) Campaign celebrates the United Nations General assembly resolution, agreed to on June 30th, 2010 and formally adopted by the General Assembly on July 2nd, 2010, to establish “UN Women”---the new gender equality entity at the UN.  This new entity combines four already existing women’s entitles that will be integrated into the new entity. The four groups that make up UN Women are:  the UN Development Fund for Women (UNIFEM), the Division for the Advancement of Women (DAW), the International Research and Training Institute for the Advancement of Women (INSTRAW), and the office of the Special Advisor to the UN Secretary- General on Gender Issues and Advancement of Women (OSAGI).

For further information and to view press release, click here.

Michelle Bachelet has been assigned by the Secretary General of the United Nations to head UN Women to take on the role on January 1st, 2011. Bachelet was the first woman elected as president of Chile; the first woman minister of defense in Chile and Latin America.  Click here for further details.

On July 19, 2010, the full United Nations Economic and Social Council (ECOSOC) voted in favour of a US-led resolution to grant the International Gay and Lesbian Human Rights Commission (IGLHRC) consultative status. IGLHRC is only the tenth organization working primarily for lesbian, gay, bisexual, and transgender (LGBT) human rights to gain such status at the United Nations.  For more information click here.

Imagine investing your hard earned money in real estate, stocks, or other financial instruments without fully understanding the level of risk!  Not difficult to imagine given the increasingly complicated financial schemes available today.

Imagine lacking basic budgeting, saving, and credit skills and you’ll have a picture of what some low income and vulnerable members of our society cope with daily.  Many people lack even the basic financial literacy skills necessary for survival and our local, national, and international communities suffer when any of its members face barriers to success.  We need to make financial literacy education a higher priority in order to ensure that everyone can make informed economic decisions that will positively impact their future.  BPW members can help empower the disadvantaged in our society by promoting and supporting financial literacy initiatives in their communities.

Over the summer BPW Canada Virtual Club experimented with new ideas in the virtual world.  We now have a public blog:  “The President’s Message” and a Facebook page!  These are both linked to our webpage on the National website care of BPW Canada’s efficient webmanager Laura Noble.  Please come out and see our new look.

I would also like to take this opportunity to invite you and all your friends and colleagues to our Teleconference Series.  These are open to all BPW Members and also the public (see the registration form to note the differences in rates).  By the time you read this our first session with Dr. Monique Frize will have taken place.  Dr. Frize was the first NSERCC Chair for Women in Science and Engineering in Canada and has made it her mission in life to advocate on behalf of women in science and engineering.  Other exciting topics pending include an assessment of women’s inclusion in the Canadian Charter of Rights and Freedoms, a chat with the National Resolutions Chairperson, Comments from our new national president, a look at the Global Summit, and an assessment of wellness.

We will be looking to expand in new areas as the year goes by, so please stay tuned and visit our page often!

Feminist History in Canada from 1960 to 2120 - Feminist Journeys

The first volume is out.  It contains the stories of Canadian women who made history in Canada.  It is a must-have for every Canadian woman to pass on to your granddaughters and grandsons so that they will know how we contributed to their well being and to the grown of this great country.  For more information click here.

It is seldom that we hear of companies focused on diversity and promoting women; however, this company wants to mentor for future promotion up the ladder.  A leading supplier of construction materials in North America is offering an opportunity for a woman to be the General Manager of Manufacturing Operations to lead its Calgary AB facility.  You may contact Emily Ackert Rutten at This email address is being protected from spambots. You need JavaScript enabled to view it. for further information on this position.

Vera Mackenzie, who was a member of the Penticton club for many years, is to be featured in the October issue of ZOOMER magazine; Vera celebrated her 100th birthday the end of May.  I'm sure BPW members across the country will be interested to read her story. She continues to be active in the community.