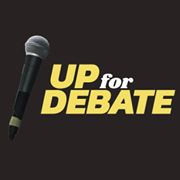 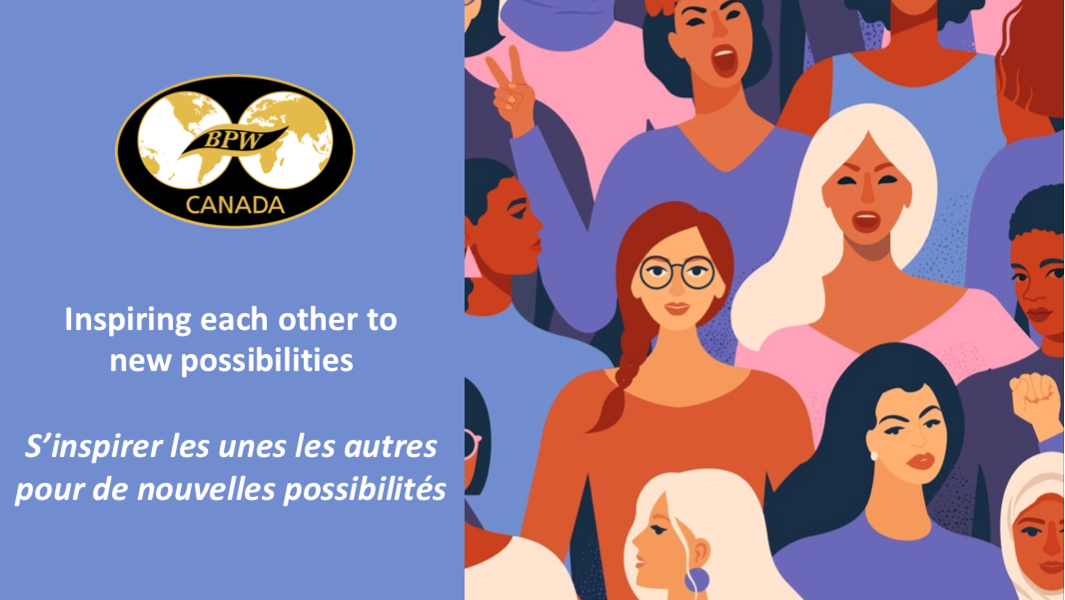 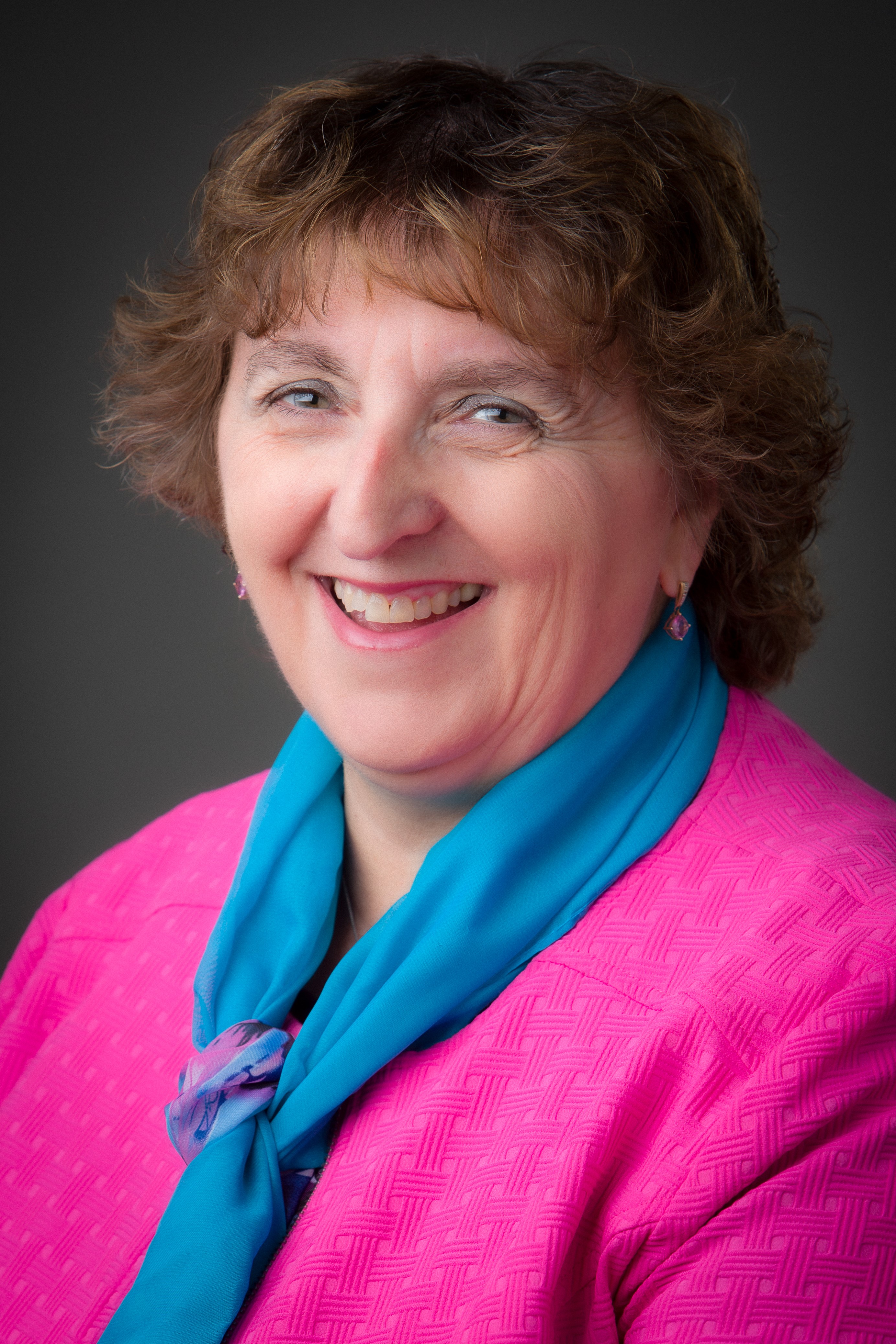 I am truly honoured to have been elected President of BPW Canada and following the footsteps of those that have held this position before me. I thank everyone for their support and confidence and I commit to working hard over the next 2 years with the talented women that are now on the BPW Canada board. Teamwork is going to be key in achieving our goals, and I know we are all anxious to work with clubs and help them with their needs. BPW Canada is your voice and I want to make sure that clubs and members don’t think that they are an island, we are here for you.

My vision is to keep BPW Canada moving forward in the work that has been done over the past 90 years, to continue to change and improve the lives of women.

We can do that by Inspiring each other and continuing to support and mentor our BPW sisters. By respecting what we all bring to the table, the potential of what we can achieve is extraordinary.

The possibilities for what BPW Canada can be are unmeasurable – I like to look at it like a tree.

It starts with the roots that started 90 Years ago when BPW Canada began at the same time as BPW International – can you imagine the strength of those women in 1930 and what it would have taken for them to travel to Geneva, Switzerland to meet with the 16 countries to form an International Federation? It is the strength of those women that we build out roots upon. In 1931 one of the 1st Resolutions passed was from Montreal Club, and it was that BPW Canada disfavours any discrimination on women based solely on their Married Status. From there in 1947 BPW International achieved Consultative Status with the UN to work to improve things for women around the world.

As our tree continued to grow our branches stretched out to include critical work to improve the lives of women in areas such as – Mentoring and Leadership and Personal Development, and lobbying for issues on Equal Pay, Human Trafficking, Violence against Women just to name a few – think about how many branches we have grown since 1930 and think of the possibilities of how many more branches we can grow.

So with these in mind, I believe the theme "Inspiring each other to new possibilities" fits into what we can do while building on what is already here. We have the best tools needed to make this happen – our members with their energy, ideas and commitment.

Just as COVID has shaken our world, it has significantly impacted how BPW operates at every level of the organization. BPW Canada is going to benefit greatly from having a board that offers both a good mix of experience and stability that can guide the organization as well as embrace the innovation and new ideas required to maintain and grow a strong BPW Canada. I am very excited to be a part of it and look forward to the Inspiration and New Possibilities that come from it. Thank you.

At the 2020 Virtual National Convention, members approved the following commendation:

BPW Canada acknowledges and commends the groundbreaking work of Senator Yvonne Boyer in bringing awareness of the issue of coerced and forced sterilization of Indigenous women in Canada; educating government, health professionals and Indigenous women; and working to find solutions to abolish this practice.

At the 2016 BPW Canada Convention members approved the following commendations: 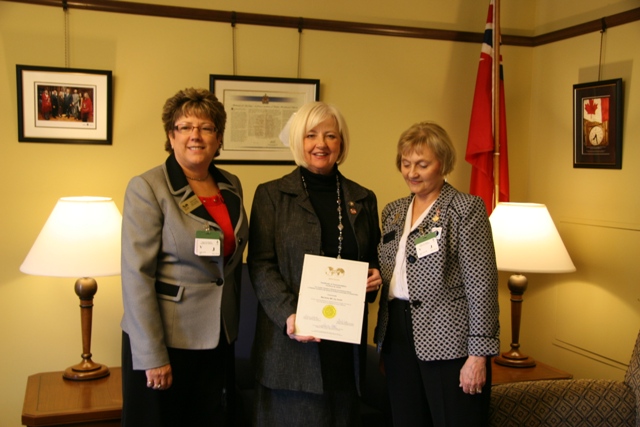 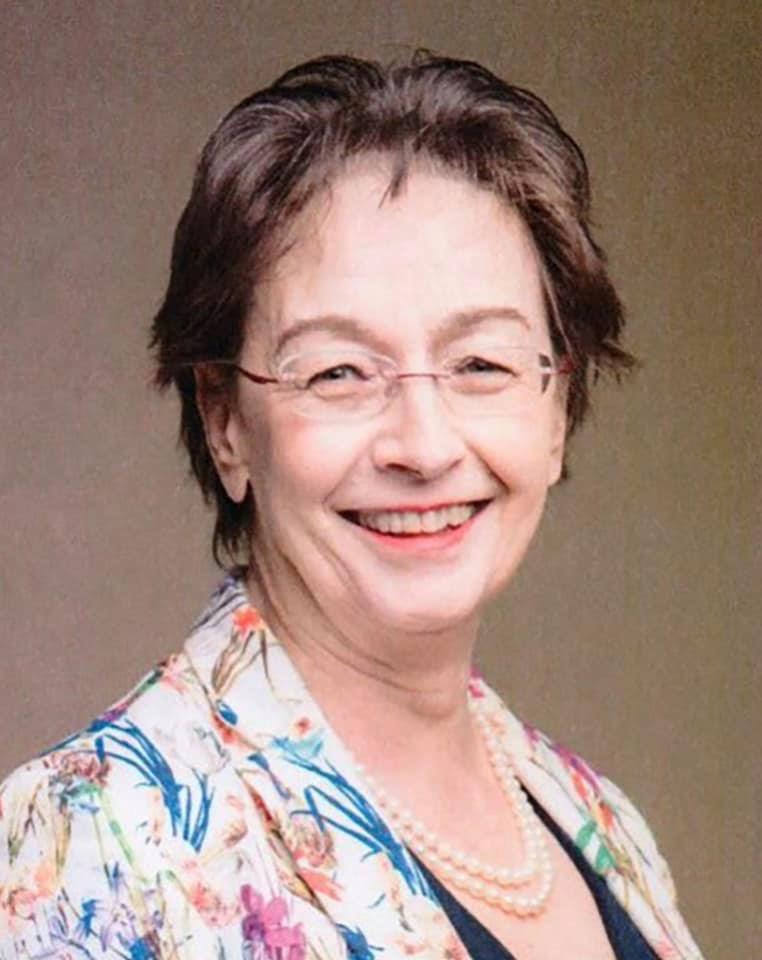 The Culture of Peace and Unity during Crisis
Continue your path to light and don’t stop to fight.

As we are lighting our candles this year we remember this unprecedented time of COVID that paralyzed the world. And remember that even with the most sophisticated technology a small virus could stop the whole world. What are the lessons learned during COVID? How are we managing this crisis? How can each one of us learn from the wisdom of crisis? Some of us lost precious lives, some families lost their means of earning when they lost their jobs, economies are affected, and healthcare systems are heavily impacted. How did we perceive all this?"...Read More

Click here to visit the Projects' website. The website includes a list of Experts, including BPW Canada's Jenny Gulamani-Abdulla (BPW Calgary). Jenny is listed as an Expert in the topics of Legislation, Society, Politics, Advocacy and UN, Partnerships, Cooperation.

Daniela Rigassi, a member of BPW Switzerland and administrator for BPW International's Pilot Program on projects (2014-2020 pilot), provides an overview of BPW projects and how you can register your own as part of the program, click here.

"Renewal of the organization of Committees:

A Resolution or an Amendment to the Constitution will suggest new structures which will replace the former Committees not headed by Executive Board Members to create much more efficient structures and services. The project-performances of all our Federations and Clubs cannot longer be ignored and must become visible so that the international Executive Board can choose the different experts for specific tasks. To obtain valuable results the Project Chair and the Members must be on the same page and the current terms are not necessarily the best timeframe for specific tasks....

The Amendment to the Constitution or Resolution will be discussed on this platform one year before Congress 2020.

All members who are convinced that the old structures need to be replaced by new, better adapted and much more efficient ones are requested to promote and to support the new proposition before and at Congress."

"Through the EVALUATION 2017 of the new services implemented by the Resolution 2014 an important gap was discovered. Why use only the overflow which means the projects of single members and let them profit from the leverage of BPW International? Why ignore the main performances of our organization, the many projects which are organized by Clubs and Federations? Previously, the Presidents of Federations and Associated Clubs have mentioned different projects in their Annual Reports which disappeared without special recognition in the archives. Therefore, a new tool will be established, the BPW Federation & Club Projects which will collect and install the projects done by Federations and Clubs. The collection of the Project titles done by Federations and Clubs is a basic and imperative tool not only for BPW International but for all organizational levels and members." ~ Source 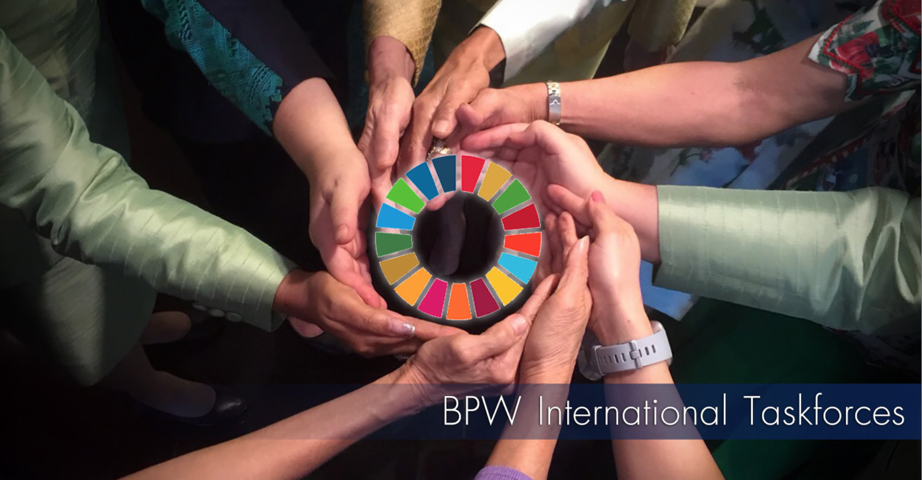 The International Trade Centre (ITC) is fully dedicated to supporting the internationalization of small and medium-sized enterprises (SMEs). It enables SMEs in developing and transition economies to become more competitive and connect to international markets for trade and investment, thus raising incomes and creating job opportunities, especially for women, young people, and poor communities. Established in 1964, the International Trade Centre, is the joint agency of the World Trade Organization and the United Nations.

Click here for more information on BPWI and ITC. 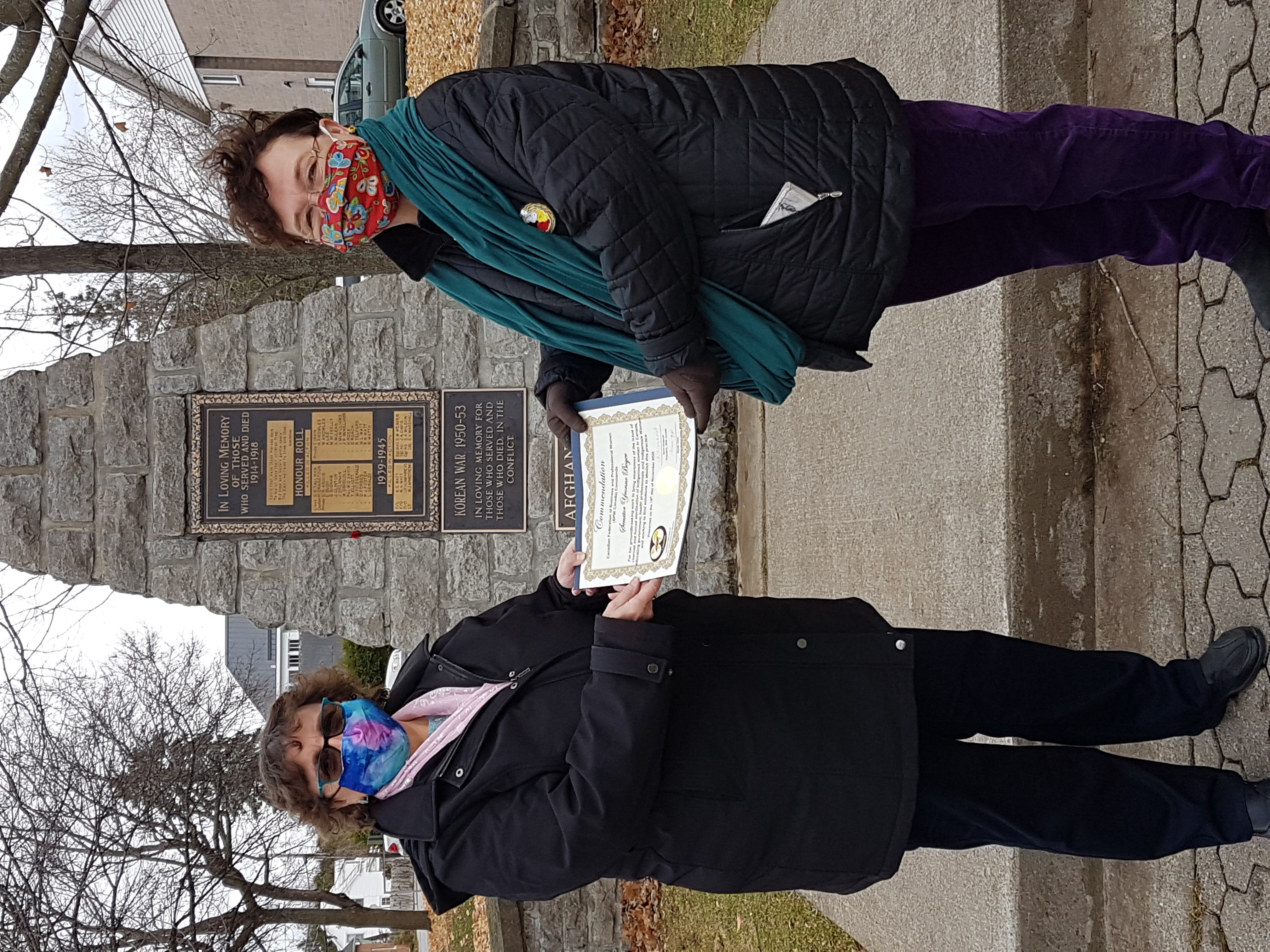 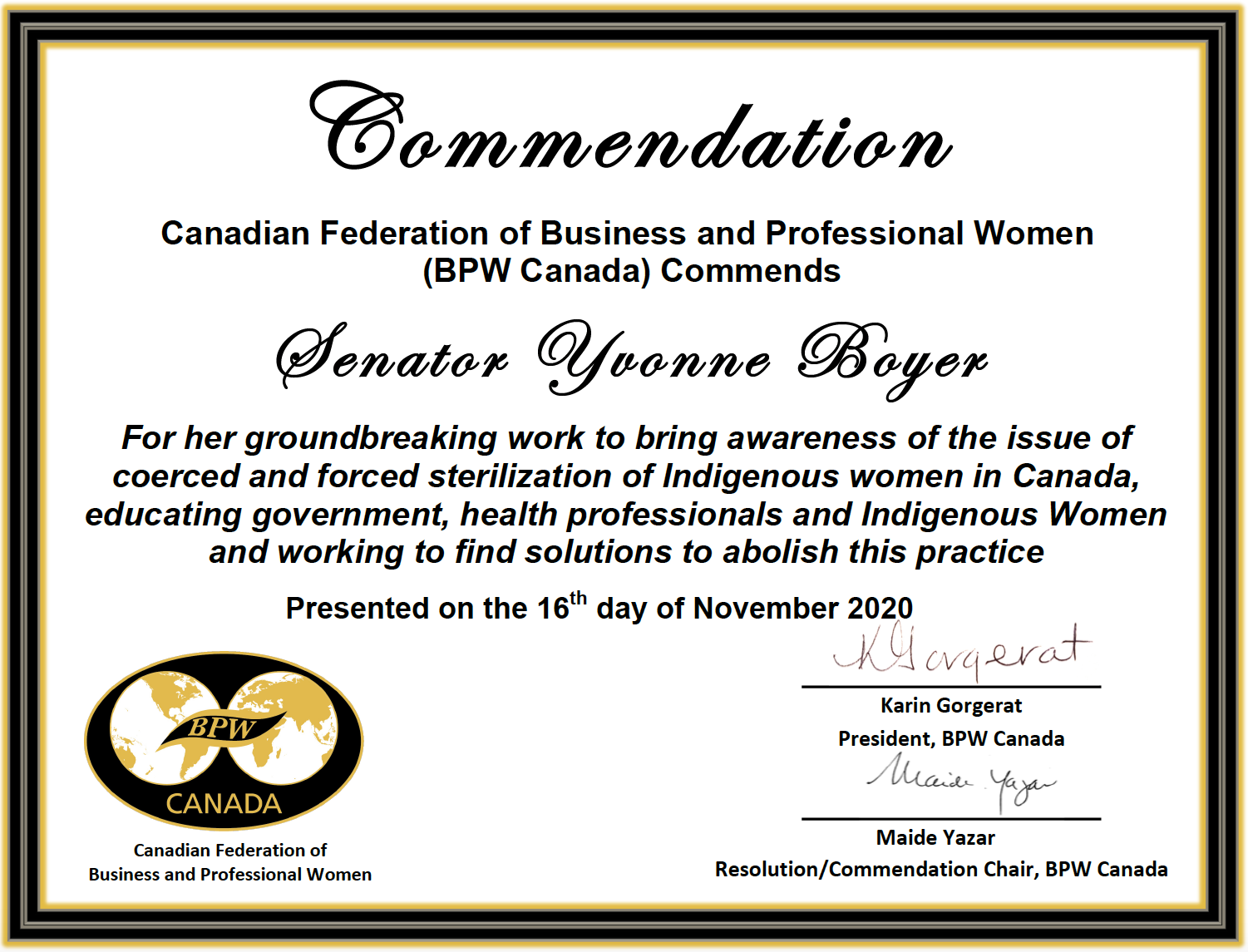 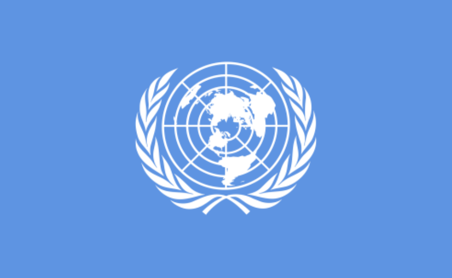 The Most Important Network

Under the emblem of the United Nations, BPW Representatives work
for different committees and organizations. 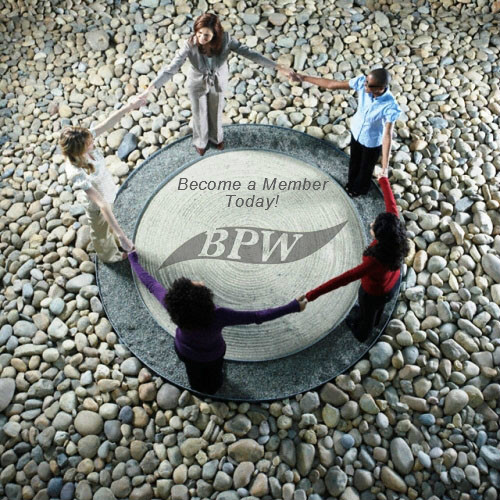 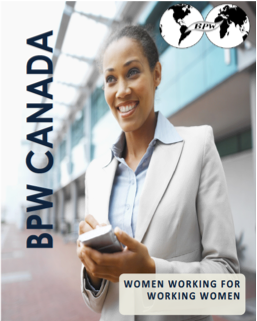